What is the difference between Jupyter Notebook and JupyterLab?

JupyterLab is the next-generation user interface including notebooks. It has a modular structure, where you can open several notebooks or files (e.g. HTML, Text, Markdowns etc) as tabs in the same window. It offers more of an IDE-like experience.

For a beginner I would suggest starting with Jupyter Notebook as it just consists of a filebrowser and an (notebook) editor view. It might be easier to use.If you want more features, switch to JupyterLab. JupyterLab offers much more features and an enhanced interface, which can be extended through extensions:JupyterLab Extensions (GitHub)

At this time (mid 2019), with JupyterLab 1.0 release, as a user, I think we should adopt JupyterLab for daily use. And from the JupyterLab official documentation:

The current release of JupyterLab is suitable for general daily use.

JupyterLab will eventually replace the classic Jupyter Notebook. Throughout this transition, the same notebook document format will be supported by both the classic Notebook and JupyterLab.

Note that JupyterLab has a extensible modular architecture. So in the old days, there is just one Jupyter Notebook, and now with JupyterLab (and in the future), Notebook is just one of the core applications in JupyterLab (along with others like code Console, command-line Terminal, and a Text Editor).

1 - To answer your question directly:

The single most important difference between the two is that you should start using JupyterLab straight away, and that you should not worry about Jupyter Notebook at all. Because:

JupyterLab will eventually replace the classic Jupyter Notebook.Throughout this transition, the same notebook document format will besupported by both the classic Notebook and JupyterLab

As of version 3.0, JupyterLab also comes with a visual debugger that lets you interactively set breakpoints, step into functions, and inspect variables.

2 - To contradict the numerous claims in the comments that plotly does not run well with JLab:

JupyterLab is an absolutely fantastic tool both to build plotly figures, and fire up complete Dash Apps both inline, as a tab, and externally in a browser.

3 - And you would probably also like to know this:

Other posts have suggested that Jupyter Notebook (JN) could potentially be easier to use than JupyterLab (JL) for beginners. But I would have to disagree.

A great advantage with JL, and arguably one of the most important differences between JL and JN, is that you can more easily run a single line and even highlighted text. I prefer using a keyboard shortcut for this, and assigning shortcuts is pretty straight-forward.

And the fact that you can execute code in a Python console makes JL much more fun to work with. Other answers have already mentioned this, but JL can in some ways be considered a tool to run Notebooks and more. So the way I use JupyterLab is by having it set up with an .ipynb file, a file browser and a python console like this: 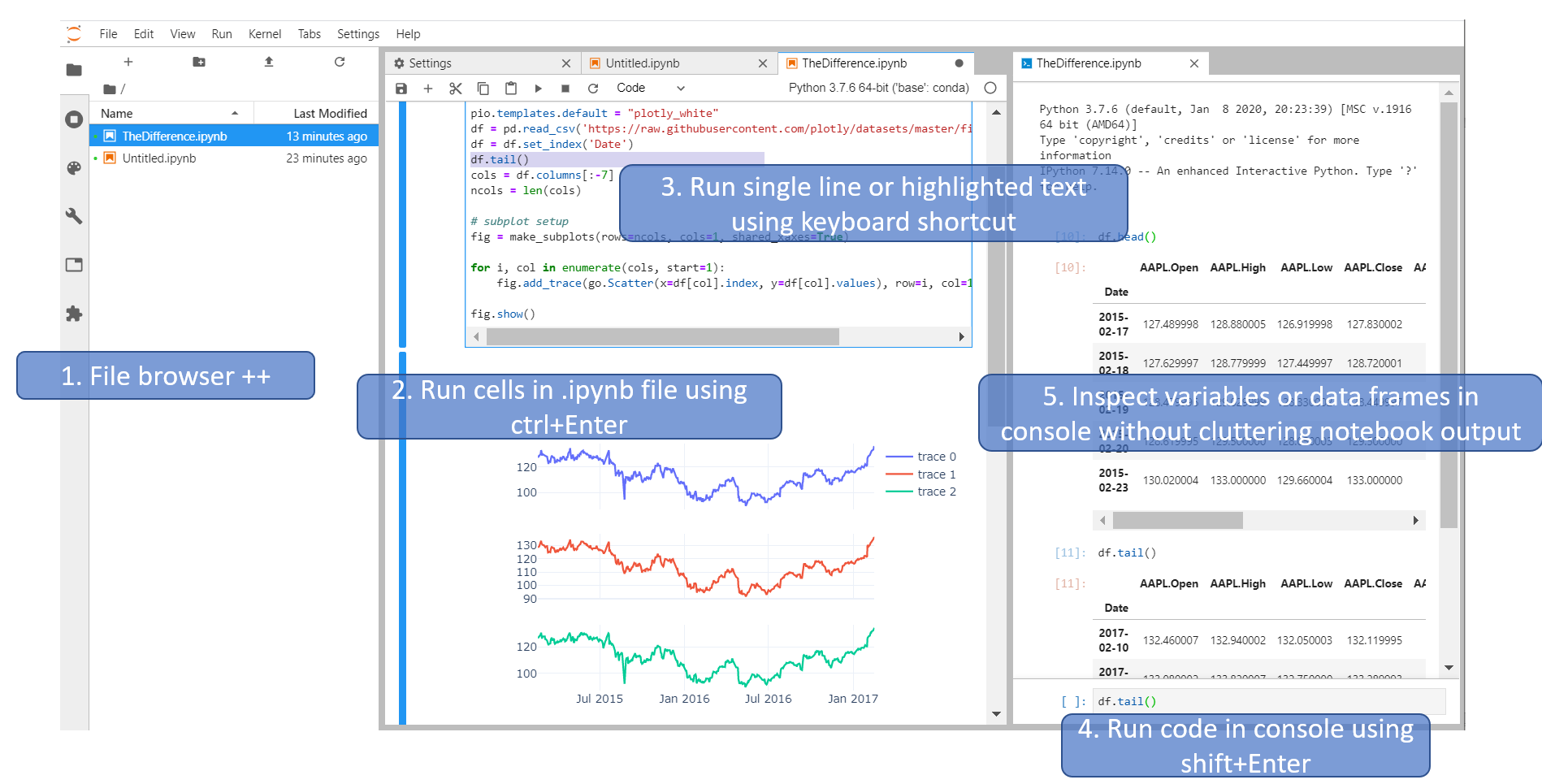 And now you have these tools at your disposal:

Is there a way to crack the password on an Excel VBA Project?

Hide scroll bar, but while still being able to scroll