Difference between Chrome Apps and Extensions

We’ve already had the concept of “web apps” in the browser for a few years, as something more rich and interactive than a website, but less cumbersome and monolithic than a desktop application. Examples include games, photo editors, and video players; all of these categories are viable as tightly focused apps running inside the browser. Google Chrome is just formalizing the web app concept in a way that will be familiar to anyone who’s used apps on a smartphone.

Extensions ... extend the functionality of Google Chrome and the websites being viewed in it. For example, they can extend Google Chrome by adding a new button to the address bar, such as an ever-present currency converter. Buttons like this can also apply to the current website being viewed—for example, click the currency converter button to convert all prices on the website you’re viewing. Similarly, you can introduce new items to the context menu, change the behavior of the omnibox (the input field on the address bar), access the user’s browsing history (with consent), and much more. You can alter web pages too—for example, embed a “mail this” button next to every link in every page, or customize the layout of your favorite website.

Compared to apps, extensions cut across websites and web apps; they are usually in effect across all websites (though some are site-specific). Apps don’t combine with other apps in this way; they run standalone, like any regular website.

From what I can tell, Chrome apps are just web applications that are registered with Chrome's Web Store (Gmail, e.g.). They're basically just glorified bookmarks. Google seems to have introduced them in order to make their browser more "operating system"-like, in preparation for tablets running Chrome OS. Since Chrome OS won't have any native applications apart from Chrome, they need some way for you to be able to "install" applications... even if those applications are just websites.

Here is an excellent resource from the Google Chrome team explaining the differences in detail.

It also contains a decision tree flow chart shown below. 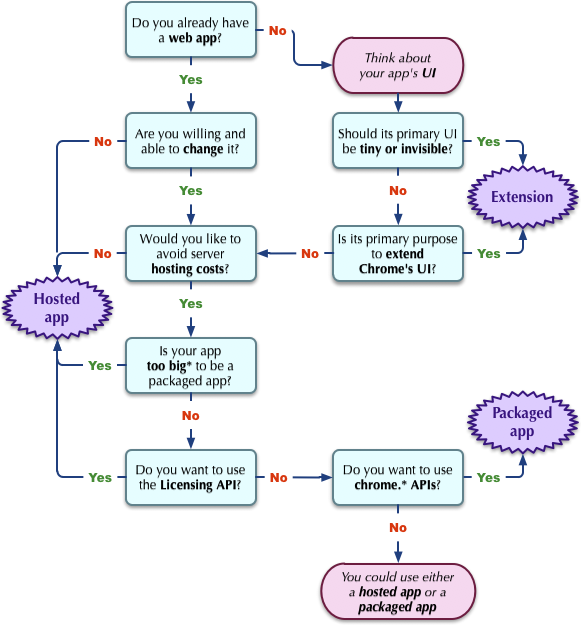 Please refer to the following link:(chrome app vs extension).It basically says that there are two kinds of apps: hosted and packaged. Hosted apps are glorified bookmarks. But packaged apps provide you with a somewhat best of both worlds features- of both extensions and apps.
Extensions of course extend the core browser functionality providing little or no additional UI apart from what is already provided by chrome.