Creating an empty Pandas DataFrame, then filling it?

Here is my advice: Accumulate data in a list, not a DataFrame.

Use a list to collect your data, then initialise a DataFrame when you are ready. Either a list-of-lists or list-of-dicts format will work, pd.DataFrame accepts both.

Pros of this approach:

If you aren't convinced yet, this is also mentioned in the documentation:

Iteratively appending rows to a DataFrame can be more computationallyintensive than a single concatenate. A better solution is to appendthose rows to a list and then concatenate the list with the originalDataFrame all at once.

But what if my function returns smaller DataFrames that I need to combine into one large DataFrame?

That's fine, you can still do this in linear time by growing or creating a python list of smaller DataFrames, then calling pd.concat.

These options are horrible

append or concat inside a loop

Here is the biggest mistake I've seen from beginners:

Memory is re-allocated for every append or concat operation you have. Couple this with a loop and you have a quadratic complexity operation.

The other mistake associated with df.append is that users tend to forget append is not an in-place function, so the result must be assigned back. You also have to worry about the dtypes:

Dealing with object columns is never a good thing, because pandas cannot vectorize operations on those columns. You will need to do this to fix it:

loc inside a loop

I have also seen loc used to append to a DataFrame that was created empty:

As before, you have not pre-allocated the amount of memory you need each time, so the memory is re-grown each time you create a new row. It's just as bad as append, and even more ugly.

And then, there's creating a DataFrame of NaNs, and all the caveats associated therewith.

It creates a DataFrame of object columns, like the others.

Appending still has all the issues as the methods above.

The Proof is in the Pudding

Timing these methods is the fastest way to see just how much they differ in terms of their memory and utility. 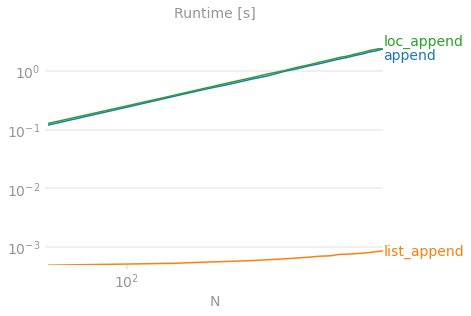 Here's a couple of suggestions:

Use date_range for the index:

Note: we could create an empty DataFrame (with NaNs) simply by writing:

To do these type of calculations for the data, use a numpy array:

Hence we can create the DataFrame:

If you simply want to create an empty data frame and fill it with some incoming data frames later, try this:

In this example I am using this pandas doc to create a new data frame and then using append to write to the newDF with data from oldDF.

If I have to keep appending new data into this newDF from more than one oldDFs, I just use a for loop to iterate over pandas.DataFrame.append()